Vietnam Rheumatology Association – abbreviated as VRA – is an organisation of and for physicians, health professionals and scientists who are working or concerning on the field of rheumatology. VRA was founded 20 years ago, according to the Decision No. 325-CT signed by Vietnam Prime Minister on 11 September 1992, stemmed from its predecessor organisation – Hanoi Rheumatology Association, which was instituted one year earlier – 20 July 1991 (Picture 1). 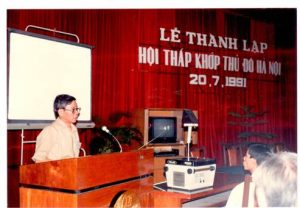 The first assembly of VRA (Picture 2) was held on 10 October 1992 in Hanoi, Vietnam with the participation of more than 300 delegates from all over the country. Most of the delegates who attended the first assembly of VRA worked in the fields of rheumatology, orthopaedics, physical therapy and rehabilitation. They also were the first and key members of the association who enormously contributed to the development of VRA in the following years.

According to the VRA regulations, National Congress is held every four years and National Scientific Conference is organised every one to two years. VRA organised the first Annual Scientific Conference on Rheumatology in 1992 (Picture 3), the same year with the first Assembly of the association. Recently, 7th Congress of VRA and 14th Annual Scientific Conference was held from 12 – 14 Mau 2017 in Hanoi, attracted more than 700 attendees and exhibited approximately 100 presentations by speakers from Vietnam and other countries such as United States of America, Phillipinnes, Taiwan, Thailand. At present, VRA has approximately 500 official members and a number of unofficial members. VRA is also a member or has members who are participants of many international organisations such as Asia Pacific League of Associations for Rheumatology (APLAR), International League of Associations for Rheumatology (ILAR), European League against Rheumatism (EULAR), American College of Rheumatology (ACR), Rheumatism Association of ASEAN (RAA). VRA used to host successfully 6th ASEAN Congress of Rheumatology in 2001 (Picture 4).

The main duty of VRA is to advance rheumatology through programs and activities of education, training, research, consultation and practice support. Since its foundation, VRA has been actively working in educating for members, establishing guidelines for diagnosis and treatment of rheumatic diseases, advising on policies for healthcare, controlling the medical professional through activities in training, re-training and examination. In addition to Annual Scientific Conferences, the association also organises many training courses, workshops, seminars on different topics in rheumatology and related specialties. These activities provide members with updating knowledge in the field that help to improve clinical practice and promote research.

In the trend of the development of the country, industrialisation progress, population growth, and aging population, the prevalence of rheumatic disease as well as other disorders are getting higher and the patterns of the diseases are more complicated. VRA with its role and function in health care is facing with new challenges. The ununity in perception and understandings of rheumatic diseases among the profession leads to different attitude and actions in clinical practice that may result in negative effects in diagnosis and treatment for the patients. The diversity of medications and methods applied make it difficult to control the unity of practice in rheumatology. In addition, the global and national economic crisis significantly affects and restricts the expenses for healthcare services. All of these obstacles are considered as priority in the agenda of VRA.

In the next five years, we will expand the association by increase the number of members in all region of the country, especially colleagues from remote areas. We will organise more education and training programs for the members. We also continue to hold annual scientific conferences and other workshops or seminars to exchange and update for our members, especially young colleagues. We are working on and preparing to introduce guidelines for diagnosis and treatment of rheumatic diseases. We will co-operate with medical education institutes, societies, hospital and health service centers to organise education programs. Furthermore, we will promote and support for research programs at different levels.

Another objective of VRA is international collaboration in education, training and research. We will send our members, especially young physicians and scientists to study abroad. We also receive colleagues from other countries or associations in exchange programs. We also will co-operate with colleagues from other countries to conduct research, particularly in rheumatic diseases in Vietnam.

As a member of Asia Pacific League of Associations for Rheumatology, VRA consider this as an opportunity. However, we also perceive responsibility as being a member of the organisation. Through APLAR, we have chance to communicate and exchange with rheumatology associations from other countries in the region. We also have chance to introduce and broadcast ourselves to other countries. We will participate actively and regularly in programs and activities initiated or recommended by APLAR. By this way, we will help APLAR and member associations to achieve objectives and duties. At the same time, we can get the support from APLAR and colleagues from other associations and organisations.

The present executive board of VRA, included of 46 persons, with key persons are President, Secretary General, Vice Presidents.

Scroll back to top