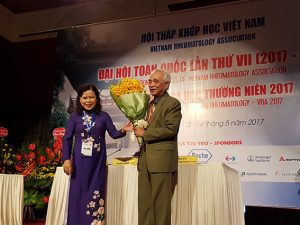 From 12-14, May 2017, the Vietnam Rheumatology Association held the 7th National Congress and annual scientific conference VRA 2017 in Hanoi with more than 700 delegates including experts, leaders, professors, doctors, medical staff specialized in Rheumatology and specialties related to Rheumatology from all regions of the country. The Congress was honored to welcome Professor. Nguyen Viet Tien – Deputy Minister of Health, Assoc. Nguyen Thi Xuyen – President of the Medical Association together with many leaders of associations, agencies and functional departments to attend. At the congress, the delegates heard the Executive Committee of the Association report on the performance of the term of office for the term of 2012 – 2017, elected the Executive Board for the term 2017-2022 as well as the direction and program of activities of the Association. The next period, with focus on the issues of specialized development, education – training, scientific research, critically consultative activities, international cooperation. The new rheumatology Association of Vietnam is composed of 61 members representing rheumatoid arthritis members from three regions of the country, military and medical people. Prof. Tran Ngoc An re-elected the next term. The Executive Committee also elects the Standing Committee and the Subcommittees on the issues of the Association.

In addition to the overall agenda, the Rheumatology Society also hosts the annual VRA 2017 Science Conference with a program and content including a variety of thematic presentations and up-to-date scientific reports on new advances. Most in Rheumatology in the country and in the world, presented by national and international reporters.

Scroll back to top